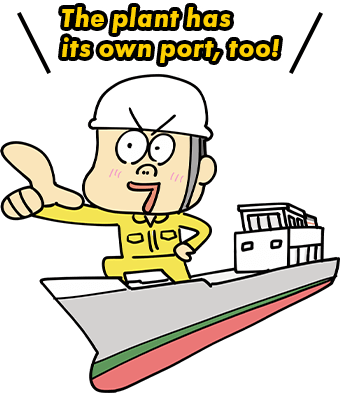 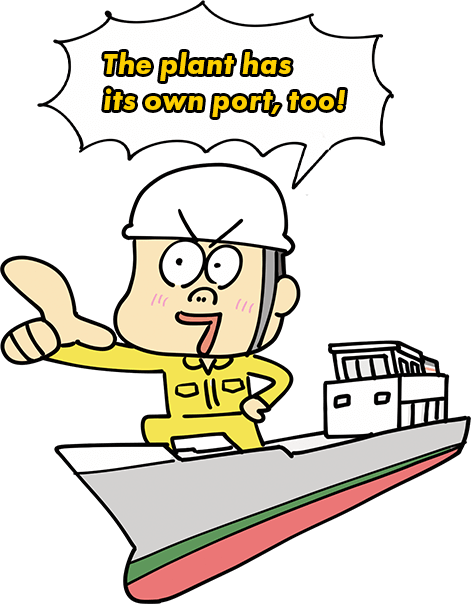 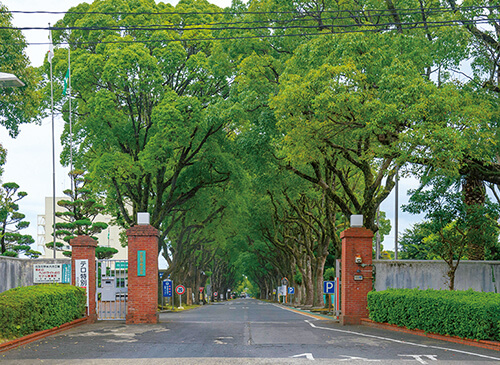 On passing through the main gate, one finds oneself in a magnificent avenue of camphor trees. More than 1,000 of these trees adorn the site. Some of them are over 50 years old.

If you are a keen gardener, you may well be familiar with pesticides. They are used to protect crops and ornamentals from diseases and pests and to control weeds.

Of Sumitomo Chemical's eight plants in Japan, Oita Works and Misawa Works are the principal producers of agricultural chemicals. We visited Oita Works where Sumisoya, the company's mainstay herbicide, is produced.

In a reactor charged with liquid and powder ingredients, the target compound is synthesized through multiple reactions. The compound is then crystallized, filtered, dried, and packaged. Aiming to expand its herbicide lineup, Sumitomo Chemical launched development of flumioxazin in the early 1980s amid calls for major development of the agricultural sector worldwide. Reflecting the determination of both management and the development team to create a herbicide that would be competitive not only in Japan but also in the global market, and especially in North America, flumioxazin was achieved after many meticulous screenings.

Our focus is Sumisoya, a word comprising “Sumi” from Sumitomo and “soya” from soya beans. As the name implies, Sumisoya is a herbicide mainly used for soybean crops. Sumisoya is notable for its long-lasting efficacy in inhibiting weed growth after spraying, thereby promoting early-stage growth of crops. Other benefits include excellent crop safety for soybeans, effectiveness against a wide range of weed species, efficacy that becomes apparent shortly after spraying, and minimal negative impact on crops grown in succession. This herbicide is currently used in 39 countries worldwide, mainly in Brazil, the United States, Argentina, and Canada in the Americas.

Sumisoya is the product name and flumioxazin is the active ingredient. Development started in the early 1980s and it was first marketed in Argentina, in 1993. The range of applicable crops has been expanded to beyond soybeans. In France, flumioxazin is marketed for long-term control of weeds in vineyards. Flumioxazin was registered as a herbicide in the U.S. in 2001, almost 20 years after its invention.

It was first marketed for pre-emergent weed control for soybeans and peanuts. Application was expanded to include control of weed growth in non-crop areas, in cultivation of shrubs and ornamentals, and in furrows of cotton fields. Subsequently, after flumioxazin was found to be effective against weeds resistant to glyphosate, a herbicide, in fields of genetically modified soybeans, sales soared.

Production of flumioxazin began at Oita Works in 1995, using a cost-competitive manufacturing process with excellent safety performance. Responding to rising demand, Sumitomo Chemical increased the capacity of the first plant in 2008, converted an existing facility into a second plant that came on stream in 2011, and added a third plant in 2012. Thus, production of flumioxazin at Oita Works has grown by leaps and bounds over the years.

Sumitomo Chemical received the 63rd Okochi Memorial Production Award in 2017 for the development of the herbicide flumioxazin, a prestigious award honoring outstanding achievements in production engineering and technology. However, flumioxazin was developed in 1984, over 30 years ago. This prompts a question: Why did it take such a long time for flumioxazin to win the award?

Following the launching of flumioxazin in Argentina, Sumitomo Chemical intended to gain registration of flumioxazin as a herbicide for pre-emergent weed control on soybeans and peanuts in Brazil and the U.S.

However, it took longer than expected to carry out tests for registration in the U.S. The regulatory regime in the U.S. became more complex owing to the Food Quality Protection Act of 1996, a new law on pesticides. Consequently, flumioxazin was not introduced in the U.S. until 2001, almost 20 years after its invention.

A hot spring in a factory? Because it's in Oita?

Sumitomo Chemical aims to expand sales centering on the Americas, which have long been the principal market for Sumisoya and offer plenty of potential for further growth in demand. The company's basic policy is to increase market share through development of new formulations and mixture products and collaboration with partners, thus sharpening cost competitiveness and strengthening Sumisoya as a brand capable of prevailing over the generic products of other contenders.

“Sustainability” is on everyone's lips and always in the news these days. What is the connection between Sumisoya and sustainability?

“Sumisoya shows a long-lasting effect in inhibiting weed growth. Therefore, a farmer who chooses Sumisoya can reduce the number of herbicide applications during the cultivation of crops. This contributes to mitigating environmental impacts. In the Americas, Sumisoya has been adopted in no-till farming, and reduced tillage cuts fuel consumption by tractors and other agricultural machinery. So, Sumisoya is helping reduce greenhouse gas emissions, too,” says Mr. Kashiwabara.

This is all news to me! I had never imagined that a herbicide could reduce environmental impacts by reducing the number of herbicide application or tillage. The next time I find myself at a garden center, I will be sure to check out the herbicides.

Tsurusaki, an area to the east of Oita city center, is located in a part of the coastal industrial zone that is home to Sumitomo Chemical Oita Works. Back in the Edo period (1603-1868), Tsurusaki, then an enclave of the Kumamoto Domain, was a flourishing port. To keep an eye on the comings and goings of numerous ships, the authorities set up a guardhouse at a spot. The monument indicating where the guardhouse once stood conjures up is on the site of Oita Works, an image in the mind’s eye of the colorful, bustling port thronged with sailing vessels. 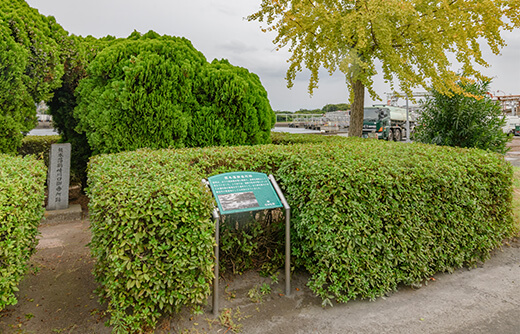 Here, on the site of Oita Works, the Kumamoto Domain’s guardhouse once stood overlooking the mouth of the River Onakashima. Steeped in history, this place evokes thoughts of Tsurusaki in days long gone.