Nissin Electric’s New Production Shop for GIS at Maebashi Works in Gunma Prefecture is a key initiative for the growth strategy of the VISION2025 medium-to-long-term business plan.

The dustproof room consisting of two zones, north and south, viewed from the second floor. With a floor area of approximately 2,900m2, it is one of Nissin Electric’s largest dustproof rooms. 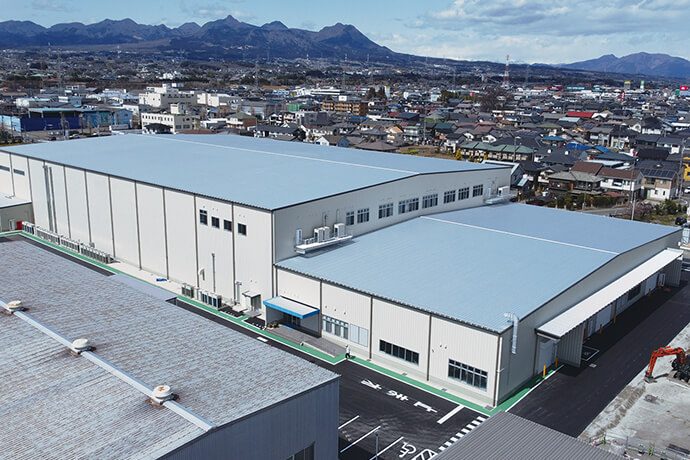 Aerial view of the New Production Shop for GIS. With two stories above ground, the total floor area is 9,800m2. Investment amounted to 3.5 billion yen. 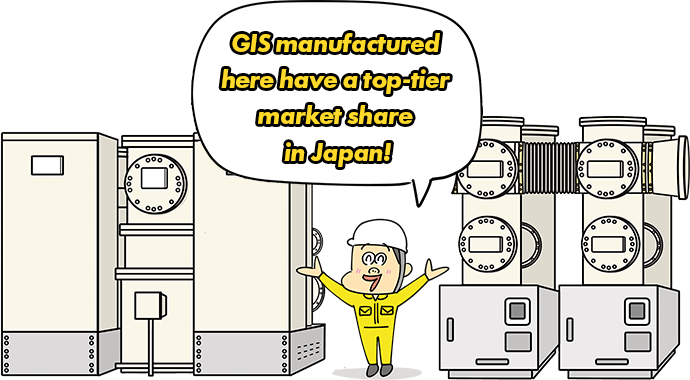 From Nissin Electric’s principal plant, Maebashi Works, in the suburbs of Maebashi City, Gunma Prefecture, fine views of Mount Akagi and Mount Haruna lift the spirits and delight the eye. In April 2022, a new production shop for gas insulated switchgear (GIS), one of the company’s mainstay products, was completed here.

This is a smart factory with an integrated production line utilizing loT and business intelligence (BI) tools. Eager to learn more about this sophisticated facility, we talked with Mr. Norio Fujizuka, who is the General Manager of the Switchgear Manufacturing Dept. of the Power System Equipment Div. and led the project team responsible for construction of the new factory, and Mr. Hajime Jingu, Chief Senior Staff.

What is GIS? Essentially, GIS is substation equipment ensuring safe and stable supply of electricity. Mr. Jingu adds, “GIS is hard at work in substations and large facilities, but it’s below the radar, not something the general public is aware of. In terms of its role, GIS is like the circuit breaker in your home.” Nissin Electric’s lineup includes one of the world’s smallest, ultra-compact types and the company has a top-tier share of the Japanese market for GIS.

What prompted Nissin Electric to construct a New Production Shop for GIS? “The former factory was showing its age,” explains Mr. Fujizuka. “Compared to 60 years ago when it opened, today’s products are far more complex, and production lines had become much more complicated and longer, with traffic lines going this way and that. One of our objectives was to improve this situation. In addition, rapid growth in the use of renewable energy will spur demand for GIS and so we needed to expand production. With the new production shop in operation, our production capacity has increased by 50% compared to fiscal 2018.”

After this briefing on the new production shop, we went to the second floor from where you can see the entire production line. A series of zones are arranged in sequence corresponding to the various processes: assembly of components, connection, inspection, disassembly, and shipping. Ceiling cranes transport components and units. “Since specifications vary depending on the customer, we produce a wide variety of products in small quantities. So, expert employees execute each process in accordance with the spec. By creating a seamless traffic line, we have achieved total optimization and cut transportation time. The result is increased man-hour productivity,” says Mr. Fujizuka.

Network cameras are installed on the production line and there are monitors in each workplace to visualize the production status in real time. The company is actively introducing the latest information technology (IT), such as linkage with 3D-CAD (computer-aided three-dimensional design and manufacturing) software and BI tools. 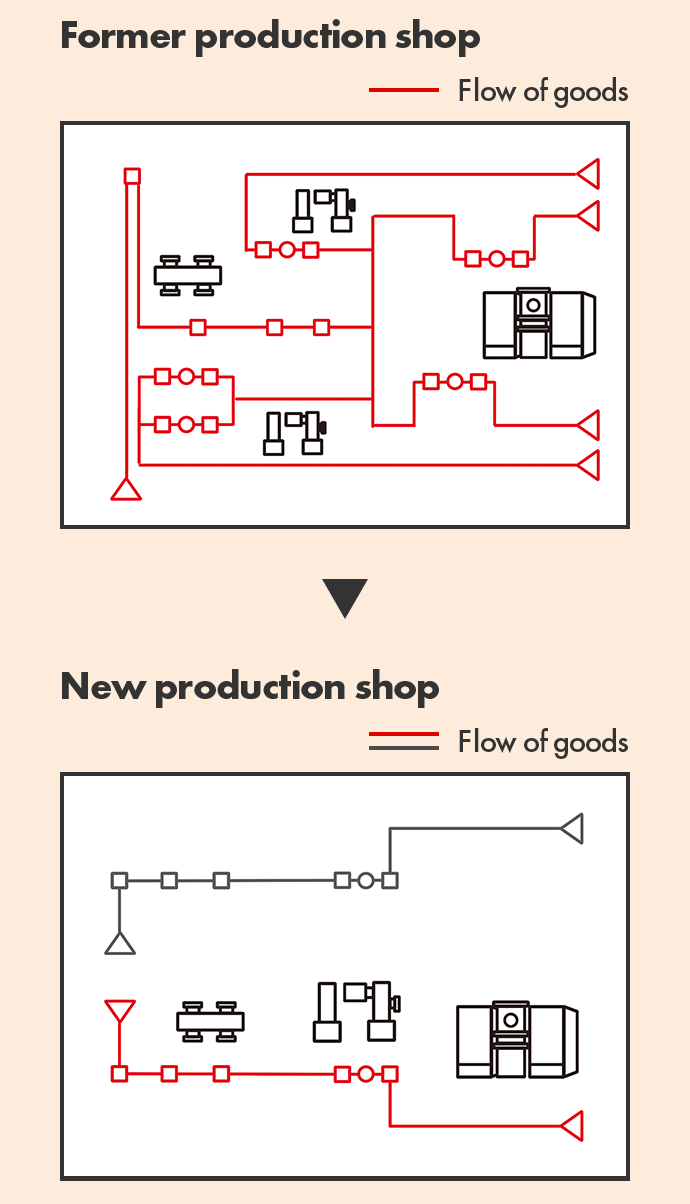 Traffic lines in the past overlapped a lot, but in the new production shop optimization of traffic lines has eradicated overlapping.

Next, we descend to the first floor and enter the production shop. Here, high technology comes into its own. For example, the entire 2,900m2 factory is dustproof thanks to an interlock system that prevents shutters separating the components warehouse, pass room, and assembly area from being opened simultaneously.

The project team for construction of the new factory was established in November 2019. However, in August 2020, during site preparation, earthenware dating back roughly 1,500 years was discovered, delaying the start of construction by about six months. The project team used the extra time to make painstaking preparations focusing on how best to apply IT. The Tone River basin, where the site is located, has been inhabited since ancient times. Whereas 1,500 years ago earthenware was an advanced technology, similarly Maebashi Works is home to today’s advanced technology, indicating a fascinating civilizational continuity.

In the VISION2025 medium-to-long-term business plan Nissin Electric has set out to strengthen its business foundation. Key elements include enhancing manufacturing capabilities and improving productivity. The initiatives at the new factory are contributing to strengthening of the overall business foundation. Nissin Electric will deploy the smart factory concept across the company, harnessing IT to improve productivity and achieve manpower savings.

Visualization of the mountains too?

At this new plant, the office zone on the second floor has various people-friendly facilities conceived with diversity and inclusion in mind. For instance, the unisex gender-free toilet is designed to meet the needs of everyone, regardless of gender, including those with disabilities and pregnant women. While ultra-accessible multipurpose toilets have become commonplace in Japan in recent years, this gender-neutral toilet is among the first examples of what promises to be a new wave of amenities reflecting the true needs of diverse users. In addition, there are five rooms of various sizes where people relax and chat during breaks. The chairs at the counter by the window sway like balance balls when you sit on them and can be used for simple health-enhancing exercises. At the suggestion of the employees, each room is named after a different peak—Akagi, Haruna, and so on—indicating the bonds of affection linking the workforce to the beautiful local landscape.