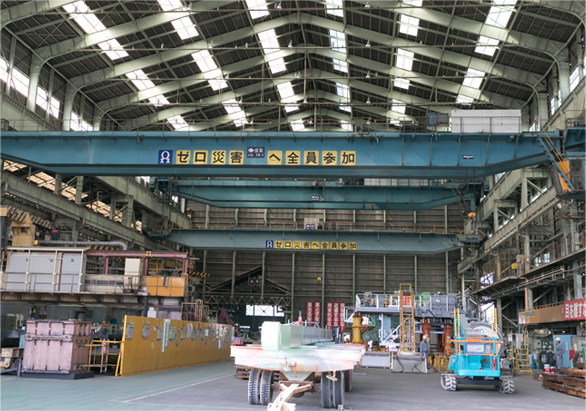 Overhead cranes are manufactured that lift and carry loads back and forth, left and right. 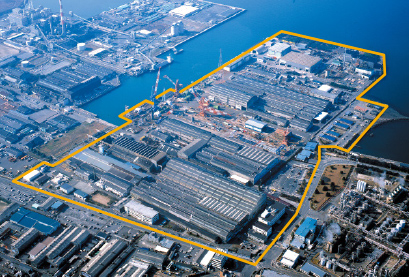 Located in Niihama City, Ehime Prefecture, it has its own quay for access to the Seto Inland Sea. Founded in 1888, the plant has been making cranes for 106 years, since producing “Overhead Crane No. 1” based on its own design drawings in 1912.

It's a 15-minute drive from Niihama Station to Niihama Plant at Sumitomo Heavy Industries’ Ehime Works, but just five minutes into that journey, while still passing through the town, a huge crane looms up ahead. This plant has been making cranes for the past 106 years. It does everything from development and fabrication to after-sales service for cranes used for handling loads that are way too heavy for us humans to mess with. Think iron ore and other bulky raw materials and the massive steel subassemblies used in shipbuilding. In short, the plant makes colossal machines to carry colossal loads! As someone whose job involves carrying nothing heavier than a pen, the mere idea of something colossal has a poetry all its own. As I pass through the main gate, the entire structure of the immense crane comes into view. And as I gaze upward at the mighty jib crane, 90m tall and weighing 2,000t, with a rotating jib capable of lifting loads of up to 300t, it looks like a gigantic robot. Since jib cranes are used mainly in shipbuilding, they have to be massive.

The jib is the arm of a jib crane. 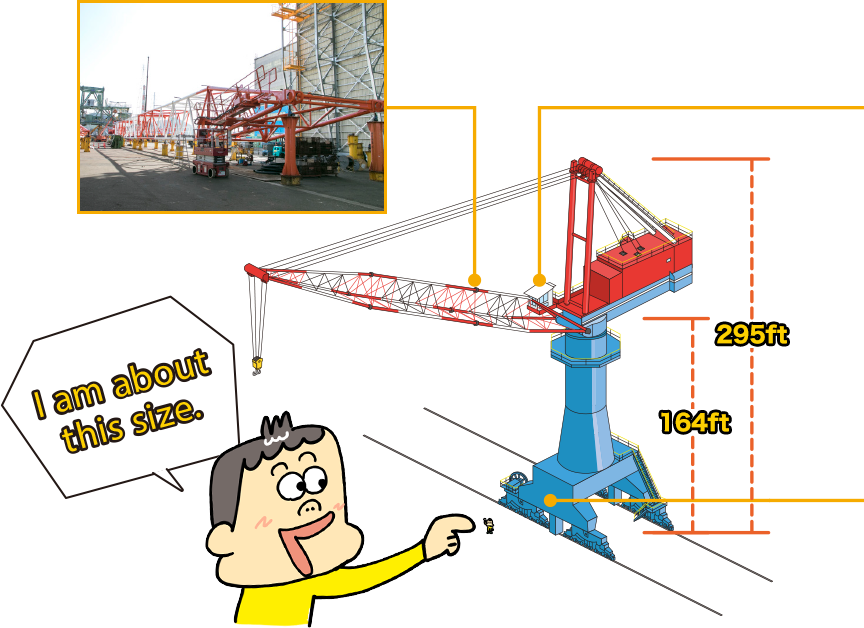 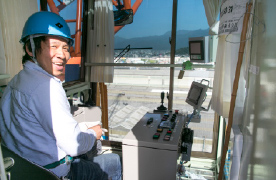 Anyone with a passion for robot anime would love the cabin of a jib crane. The floor is partially glazed. The operator lifts the load while adjusting its position in accordance with signals from a person on the ground beside the load.

The jib is the arm of a jib crane. 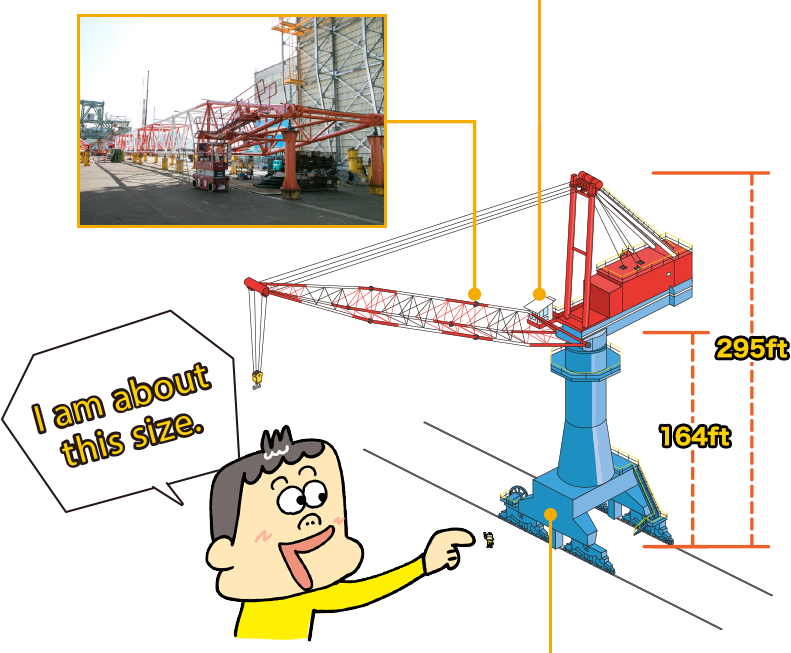 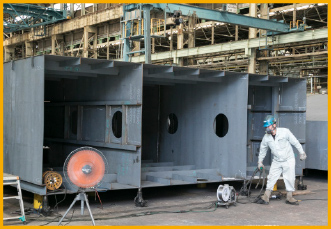 The struts that support the jib crane.

The jib crane fabrication site was an eye-opener. For one thing, the parts, such as the struts, were far bigger than I had imagined. I felt like a Lilliputian in Brobdingnag. In my mind’s eye, a factory is a place where products take shape as they flow smoothly along production lines, but this was nothing like that. The company uses a made-to-order system, with iron plates cut, processed and assembled according to the order, and so various parts are laid out on the manufacturing floor.

I was invited to ascend the crane. First, you climb a set of stairs attached to one of the legs to a height of about 15m. This may not sound like much but you are already in a different, somewhat scary, world. Next, you go up in an elevator inside the pillar, traveling from the top of the strut to the top of the pillar. On leaving the elevator, you find yourself 50m above the ground, with a spectacular view. Looking down, the factory roof looks small. When I heard that I would be going from there up to the cabin via another external staircase, I instinctively grabbed hold of the handrail.

From a vantage point high up in the spacious cabin, the operator pilots the jib guided by signals from the ground, carryings the load to the target position. To make it easier to adjust the position with the naked eye, the cabin has a partially glazed floor. So now I felt like a giant...actually not! It was just too scary (lol). But as I observed the various cranes operating on the company’s shipping quay, I experience a rush of newfound self-confidence, as if I were the hero in a robot anime. The higher up you are, the more important you feel. And this feeling led to a 4-frame manga (at the end of the article) ...

Back on Earth after my trip up the jib crane, the next stop on my itinerary was the place where overhead traveling cranes are fabricated. Typically installed in large industrial plants, between the walls, near the ceiling and parallel to the floor, overhead cranes lift and carry loads back and forth, left and right. Since each crane has to fit the size of the building where it is to be installed, they vary greatly in size: the width can be anything from 1.5 to 200m and load capacity ranges from 2 to 500t. Watching an overhead crane carrying its load, I was struck by something unexpectedly familiar about the scene. It was just like the claw crane I used to play around with at the amusement arcade! So maybe cranes are not so alien after all.

Various safety measures in the factory 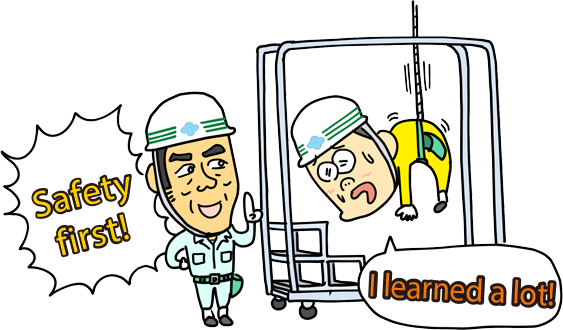 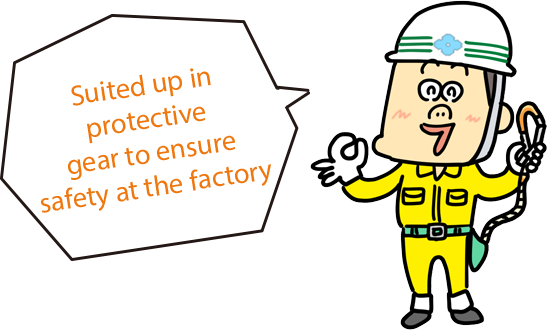 What I was curious about at this point in my visit was, “How are they delivered?” According to Mr. Tatsumi, head of the manufacturing department, “It depends. When it is a jib crane to be used at sea, it is delivered by ship. If it is an overhead traveling crane to be used at a factory, it is often transported by land.” After it is assembled at the manufacturing plant and has completed its quality and safety testing, it is disassembled and then finally reassembled at the delivery destination.

For me, the most impressive aspect is the meticulous approach to safety. There are three major categories of safety measures, for “Products, Customers, and Employees”. The “Product” is subjected to painstaking safety measures at the design stage, such as to minimize any swaying of the carried load. The safety of products is also checked in a pre-shipment inspection. A dozen or so people from the customer’s company run their gloved hands over the product. If the welds have not been smoothed, the glove fabric will snag, and fibers will come undone. And if there are any protruding bolts that might cause someone to stumble or any slight gaps, they are corrected.

There is also maintenance training for the “Customers” who actually use the products, and it is not unusual for the people in charge at the delivery site to come from overseas to undergo training. I was amazed to learn that, thanks to careful maintenance, there is even a crane built in 1925 that is still in use. And naturally, the company also provides thorough safety education to the “Employees”. Before starting work each day, they collectively read a day-to-day calendar on which are written work rules and examples of accidents in the industry. In addition to posting safety slogans throughout the plant and having the voices of employees’ children giving safety reminders over speakers, there is also an emphasis on the participation of all employees in accident simulations using safety education equipment in order to eliminate any momentary carelessness. Meticulous safety measures have been integral to the company throughout its 106-year history.

The food on my plate may have been transported in a ship built using a crane manufactured at Niihama Plant. This realization that everything is connected induces a feeling of affinity with the cranes created at the plant, which at first had struck me as being alien monsters. “So, Jib, thanks pal!”

Founded in 1888. Started as the engineering department of Sumitomo Niihama Branch in charge of purchasing and repair of machinery and equipment used at Besshi Copper Mines. The industrial crane business began in 1912, with the construction of “Overhead Crane No. 1” based on the company’s own design drawings. The crane in the upper photo was built in 1932, and the one in the lower photo in 1937.

From this issue, Mr. Hiroki Tsuboi will be writing the manga column. It’s a happy coincidence that Mr. Tsuboi’s parents both used to work for the Sumitomo Group. Our first trip with Mr. Tsuboi was to Niihama, a place with a special resonance in Sumitomo’s history, which made everything that much more exciting for all of us.

What really hits you is the sheer size of the crane.
We took lots of photos to get the best shots that would capture the scale and dynamism of this jib crane soaring 90m above the factory far below.

In the main photo, you can just about see our guide Mr. Tatsumi against the bright blue of the jib crane pillar. Holding the rail with one hand, he is beckoning us with his other hand. It gives a sense of scale.

As mentioned in the article, the safety of this gigantic machine is meticulously checked, even to the extent of touching it with gloved hands to find any protrusions in the welds. I take my hat off to people at Niihama for their painstaking work and uncompromising commitment to safety.