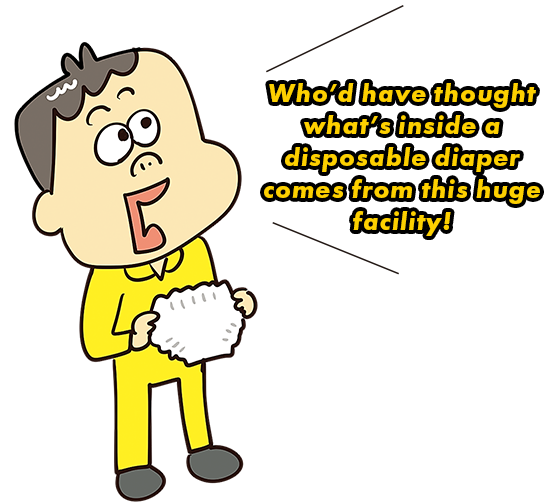 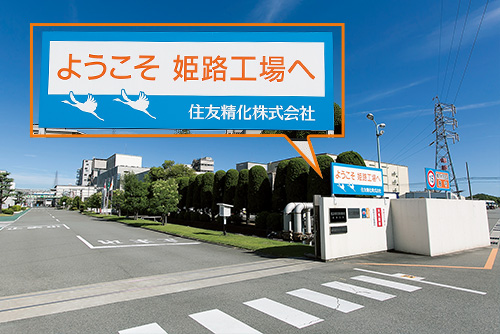 Himeji Works’ first mission was to produce ammonia and methanol from recycled exhaust gas emitted by a nearby steel plant (of the former Fuji Steel Co., Ltd.). This groundbreaking collaboration between a steelmaker and a chemical company attracted attention at the time.

As a father of two children, I am certainly familiar with disposable diapers for babies and infants. Super absorbent polymer holds urine to prevent leakage. I recall watching a video clip of a demonstration illustrating the absorption performance of disposable diapers: a diaper absorbed at least half a liter of water poured from a plastic bottle. So how is this magical material produced?

To find out, we visited Himeji Works of Sumitomo Seika Chemicals where AQUA KEEP (AK for short) super absorbent polymer is produced. From the image associated with sanitary products, I was imagining an uncluttered white space with powdery absorbent resin supplied through glass tubes. But first, outside under the hot midsummer sun, I was shown four gigantic tanks. They contain acrylic acid, the principal raw material of AQUA KEEP.

“Acrylic acid is a difficult chemical to handle. If temperature control isn’t done properly, a chemical reaction called natural polymerization may occur, leading to ignition. No other company in Japan has huge tanks for acrylic acid like ours,” explains Mr. Hideshi Tanigawa, General Manager of Himeji Works. I had no idea that if you trace the humble disposable diaper back to its origins, you will find yourself in a world of complex, potentially hazardous, chemical processes.

Since this a chemical plant, there is plenty of complicated piping routed around the site. Acrylic acid is supplied to the AK Facility, where AQUA KEEP is produced.

“Himeji Works started making the forerunner of AQUA KEEP back in 1983, and the oldest facilities date back to that year. Ever since, spurred by growing demand for disposable diapers, we have been adding new facilities. Demand soared in the 1990s. In the 21st century, the pace has quickened with a new facility coming on stream every couple of years and the facilities themselves getting bigger, reflecting the expansion of demand,” explains Mr. Manabu Fujiwara, Manager of the General Affairs and Personnel Office.

Until the mid-1980s, consumers tended not to regard disposable diapers as run-of-the-mill everyday products but instead used them when doing something special, such as going on a trip. But they have become commonplace products viewed as daily necessities. The expansion of the AK Facility at Himeji Works reflects this history. “Demand for disposable diapers is still on a steep upward trajectory, centering on China and developing countries. Given these circumstances, our business will likely experience further expansion in the future.” (Mr. Fujiwara) 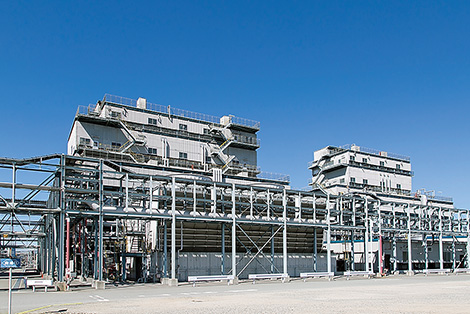 AQUA KEEP produced in the AK Facility (photo above) is stored temporarily in a pencil-shaped silo (photo on the rightbelow), and then, using compressed air, is supplied to the packaging area via piping . From there, AQUA KEEP is exported worldwide.

Sumitomo Seika Chemicals’ AQUA KEEP is known for its high quality. Does the quality of super absorbent polymers depend on how much water they can absorb?

“It isn’t that simple. When it comes to disposable diapers, just absorbing moisture well isn’t enough. When a baby urinates, if it is absorbed in an instant, the baby wouldn’t notice. So, fine adjustment of the material properties is required so that although it is absorbed, there is a noticeable trace so that one knows that the baby has in fact urinated. Such needs vary among disposable diaper manufacturers, but we can respond to various requirements because with our technology we can perform fine control of the water absorption speed. That’s our strength.” (Mr. Tanigawa)

I didn’t know the water absorption speed could be controlled so precisely. Some applications require instant water absorption. Take water-repellent tape for communication cables, for example. The surfaces of optical submarine cables for Internet traffic are covered with vinyl or some other material. AQUA KEEP makes sure the cable core never comes into contact with water even if the vinyl cover is broken.

The function of super absorbent polymer is to capture water molecules and stop them sloshing around and making a mess. In the demonstration, 300 milliliters of water was poured onto about 3 grams of AQUA KEEP of the type typically used in disposable diapers. Within about 30 seconds,
AQUA KEEP has captured all the water, holding it as a semisolid. Even when the beaker is turned upside down and shaken, the contents scarcely move and don’t fall out. We were all amazed by AQUA KEEP’s power to hold water, which exceeded our expectations. Seniors are understandably reluctant to wear large diapers. Disposable diapers are expected to evolve into something people will wear without feeling there is much difference from wearing ordinary underwear.

On the other hand, there are still many countries where the market for disposable diapers is in its infancy. According to a survey, widespread use of disposable diapers for babies is triggered when GDP per capita exceeds 3,000 U.S. dollars. India and most African countries have yet to reach that point.

“In these countries, childcare is far more labor-intensive than in developed countries, which impedes the advancement of women in society. Or there are girls who can’t attend school when they have a period because they lack sanitary products. The diffusion of disposable diapers and sanitary items will give millions of people educational and employment opportunities that they never had before. We want to see a wave of new products that exploit the properties of AQUA KEEP to contribute to development in societies throughout the world.” (Mr. Tanigawa)

“The humble disposable diaper is indeed a powerful tool in the quest for a better world!” I felt that these familiar products have life-changing properties.

As mentioned in the article, the absorption capability of diapers must be such that the baby briefly feels discomfort when it urinates but leaking does not occur. This was contrary to our seemingly commonsensical notion that the greater and the faster the absorption capacity, the better. After listening to a detailed explanation accompanied by an experiment, we recognized what extraordinary things diapers are and how much thought goes into them. We heard that the same technology is used for diapers and artificial snow of the kind used in window displays. Diapers and artificial snow…What a combination! So this visit was also a chance to learn how a technology can have all sorts of unexpected applications that, at first sight, are entirely unrelated.