SCSK offers businesses a full lineup of IT services comprising everything they need to thrive in a datacentric world. Opened in 2015, netXDC Chiba Center No. 2 is Tier 4 certified, meaning it satisfies the highest security requirements of the data center facility standard of the Japan Data Center Council. 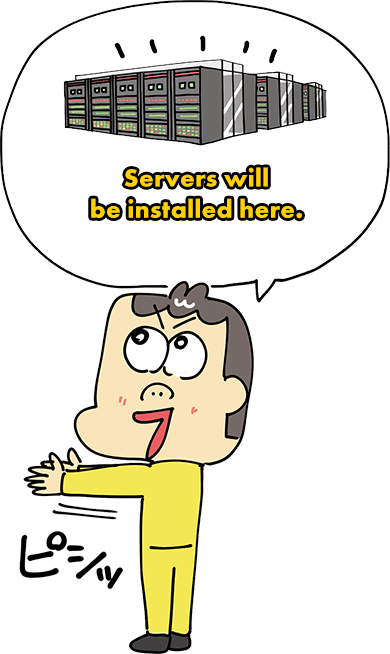 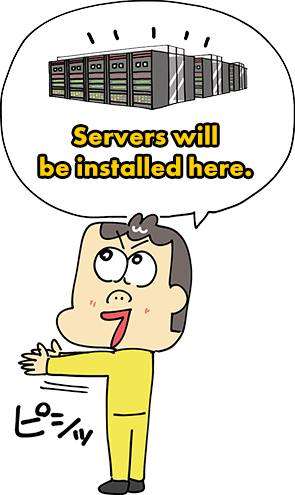 Spacious server room with a 3.2-meter ceiling.
Water-cooled air conditioning is adopted. A cold aisle, where cold air is blown up from beneath the floor, and a hot aisle, where the heat discharged from the servers escapes through the ceiling, are separated by vinyl curtains to prevent mixing of cold air and discharged heat. As a result, the optimum operating temperature is maintained while minimizing the air-conditioning burden. 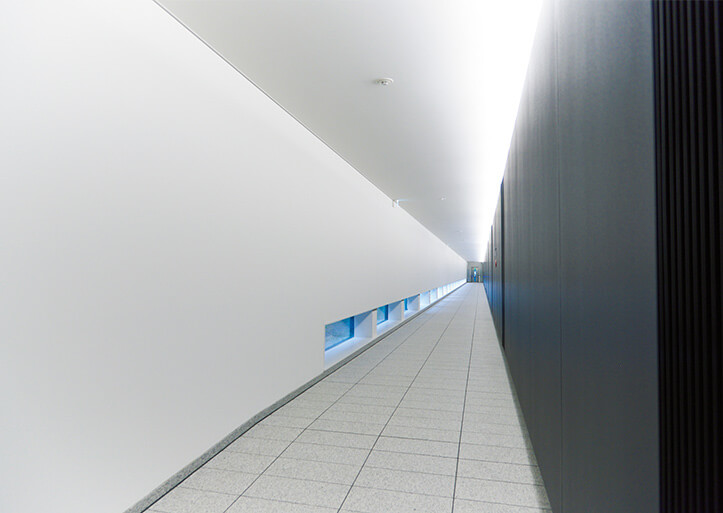 Spacious server room with a 3.2-meter ceiling (above).
Water-cooled air conditioning is adopted. A cold aisle, where cold air is blown up from beneath the floor, and a hot aisle, where the heat discharged from the servers escapes through the ceiling, are separated by vinyl curtains to prevent mixing of cold air and discharged heat. As a result, the optimum operating temperature is maintained while minimizing the air-conditioning burden.
Shown on the leftShown on the above is a long corridor leading to the server room.

Here I am in Inzai City in Chiba Prefecture. This is a great place to live. Indeed, it was ranked top seven years running, from 2012 to 2018, in the Livability Ranking by Toyo Keizai, Inc. Inzai City is part of the Narita/Chiba New Town Core Business City championed by Chiba Prefectural Government. Reflecting the favorable disaster risk assessment of the area based on the presence of faults and ground conditions, several leading Japanese and foreign companies have opened data centers here in recent years.

A pioneer of this trend, SCSK Corporation opened its first data center in Inzai City in 2002. SCSK has an impressive track record of data center operation going back more than 30 years to the 1980s. My destination is SCSK’s netXDC Chiba Center No. 2, known as SI2 for short, which came on stream in April 2015. SCSK’s longcultivated expertise in data center operation is evident throughout this state-of-the-art facility. Let’s go inside and take a look!

At the very threshold of the building, the alarm goes off. What have I done? What’s going on? Mr. Hiroshi Okubo of SCSK’s netXDC Data Center Division explains the drama: “Here at the entrance, a metal detector set at the highest security level reacts even to a belt buckle.” Having filed an application in advance for all the devices I have brought with me, I place everything on the X-ray inspection apparatus. So I am thinking that getting inside will be a breeze… This experience brings home to me just how strict the data center’s security measures are. They detect not only dubious people but also hazardous or suspicious objects. 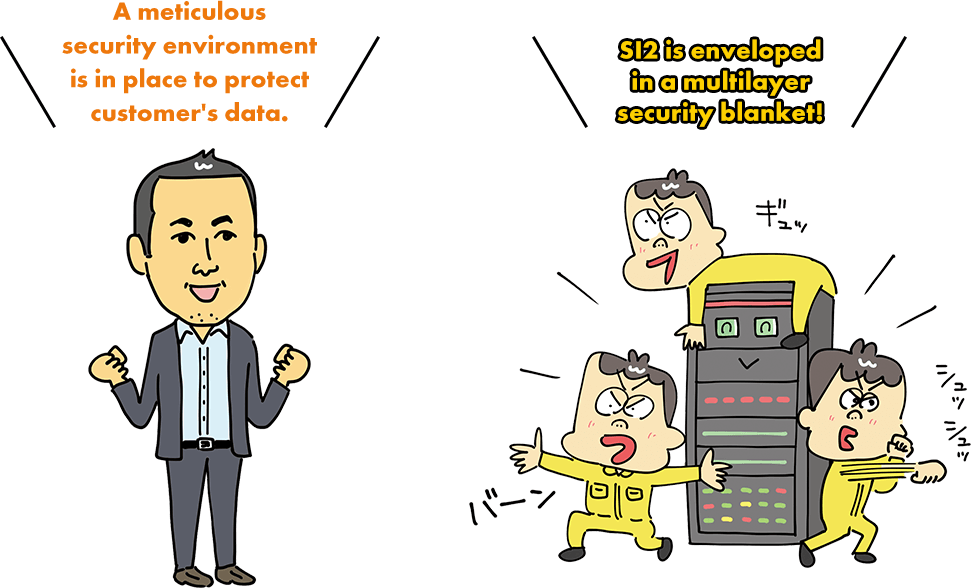 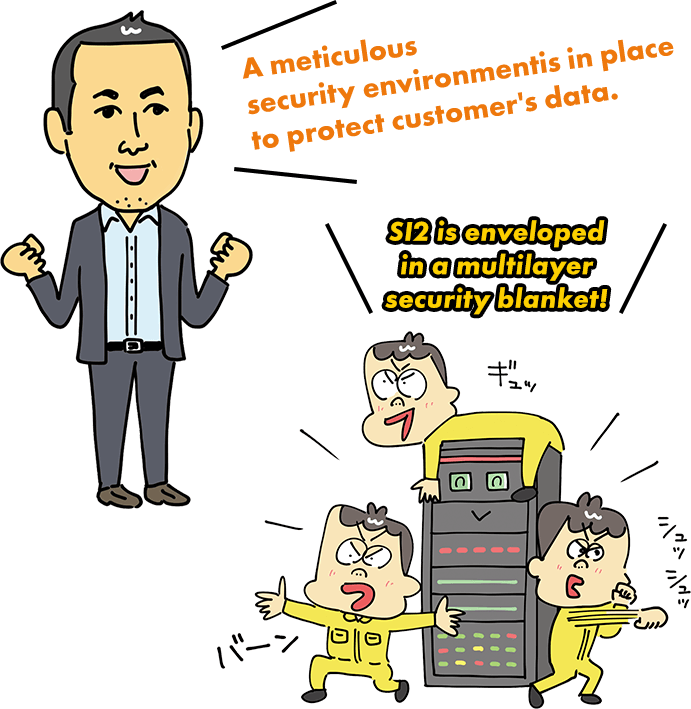 How about countermeasures for natural disasters such as earthquakes? Mr. Okubo led me down to the foundations of the building, way below ground level. Piles extending to a depth of 30 meters are anchored on a base equipped with laminated rubber isolators to soak up lateral vibration. “The building kind of floats on this base isolation structure,” says Mr. Okubo. So, if an earthquake were to occur, the vibration of the ground would not travel directly to the building but, instead, it would be minimized. And for longitudinal vibration, every floor is fitted with vertical earthquake dampers. In the event of an earthquake, up to 80% of the vibration of the building would be attenuated.

As is well known, data centers have a gargantuan appetite for electricity. The rows of servers on the racks work unceasingly, as do the air conditioners and arrays of sensors supporting their stable operation. True, you need lots of electricity to keep a data center running safely and securely. But, with an eye to protection of the global environment, power consumption beyond what is necessary should not be tolerated.

To curb electricity consumption, SI2 employs the latest green technology. An outside air-cooling system, which sucks in cool air from outside the building, operates in combination with a free cooling system. Control of the intake and use of outside air for air conditioning according to the season greatly reduces the load of the air conditioning heat source. SI2 complies with the temperature and humidity conditions for data centers recommended by the American Society of Heating, Refrigerating and Air-Conditioning Engineers (ASHRAE). Mr. Okubo explains: “If you take the total power supplied to the data center and divide it by the amount of power consumed by the IT equipment, you get a ratio known as the Power Usage Effectiveness (PUE), which is an indicator of energy efficiency. The closer the PUE value is to 1.0, the higher the efficiency. Targeting a PUE of 1.3, the highest level in Japan, SI2 is committed to the greening of IT.” Effective utilization of the external natural environment helps make this data center as environmentally friendly as possible. 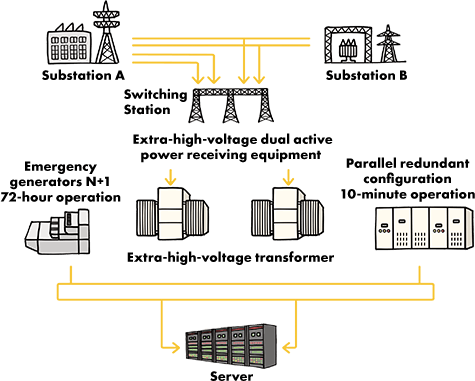 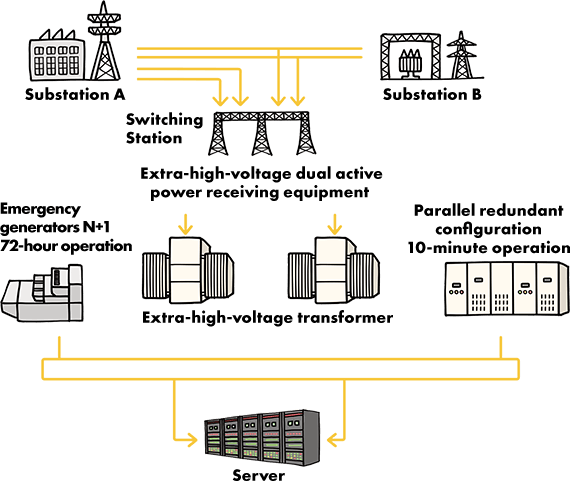 As in all data centers, the server room is the zone requiring the most cooling. But the novel design of SI2’s server room means this can be accomplished with less energy than in previous data centers. In front of the rack of servers is a cold aisle and at the back of the server rack, where heat is emitted, is a hot aisle. Thanks to a system of partitioning using vinyl curtains, heat goes straight up to the ceiling. And because mixing of hot air and cold air is prevented, cooling efficiency is high.

SI2’s power supply systems include several levels of redundancy. So the possibility of any interruption in power supply is vanishingly small. In addition to extra-high-voltage dual active power receiving equipment for electricity supplied by a power utility, the uninterruptible power supply (UPS) system and emergency generators have backups so that power supply is ensured for 72 hours even if power supply from the power utility stops. With all this redundancy meticulously built-in, SI2 has Tier 4 certification, the highest level of the data center facility standard established by the Japan Data Center Council.

In love with the data center

Emergency generators are installed outside the data center building. From a window on an upper floor, Mr. Okubo points out five generators. I can also see residential developments and extensive woodland. To the left, netXDC Chiba Center No. 3, scheduled to open in 2022, is under construction. And to the right are a huge logistics center and several data centers. “Many foreign companies are setting up data centers in Inzai City,” says Mr. Okubo. Accompanying this development, new residential areas are springing up. Inzai City is growing fast.

SCSK’s data center is a pioneer of this trend. Whereas in the past, the nuts and bolts of industry created plenty of work and attracted lots of people, nowadays concentrations of data exert a centrifugal force, pulling in people and spurring development. Just look around and you will see what I mean. This area is on an upward trajectory.

SCSK’s data center is in Inzai City, Chiba Prefecture. The “In” in “Inzai” refers to “Inba-numa,” the prefecture’s largest lake, formed long ago by the damming of a valley in the Shimosa Plateau by sediment deposited by the Tone River. From the Edo period onward, several reclamation projects were undertaken in the area to facilitate water transport, prevent flooding, and create more land for development. Inba-numa is still a source of water for agricultural and industrial purposes. Water piped from the lake is supplied to the Keiyo Industrial Zone on the northeastern coast of Tokyo Bay by the prefectural water utility. Just as Inba-numa has been underpinning the local economic infrastructure for centuries, so, in the present era, data centers are at the heart of the information infrastructure sustaining contemporary society. 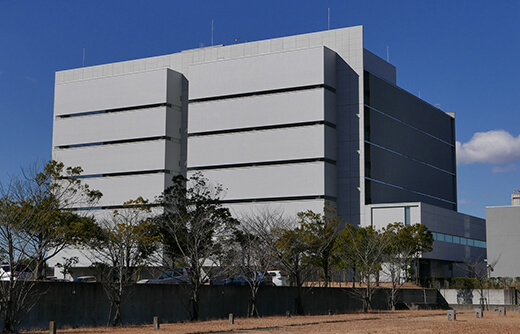 netXDC Chiba Center No. 2 is 10 km from Inba-numa. Several ponds and rivers in the vicinity of the data center and the nearby train station make for an interesting topography that delights the eye.