Bessodani Bridge is a 27.5-meter-long bridge under construction in Awa City between the Donari and Udatsu interchanges on the Tokushima Expressway in Tokushima Prefecture.What makes this bridge on the expressway so special is the adoption of a revolutionary structure. In fact, it is the first such expressway bridge in the world. 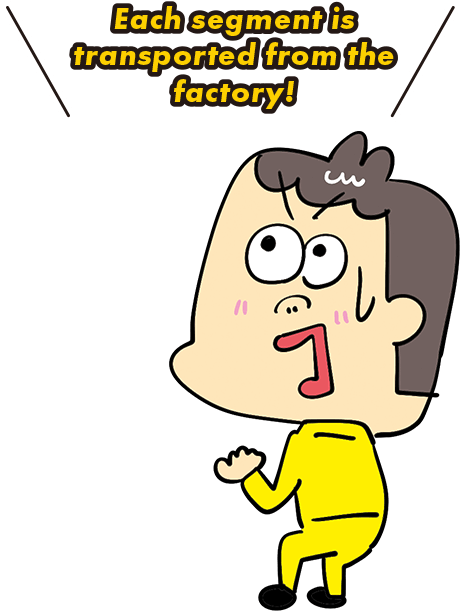 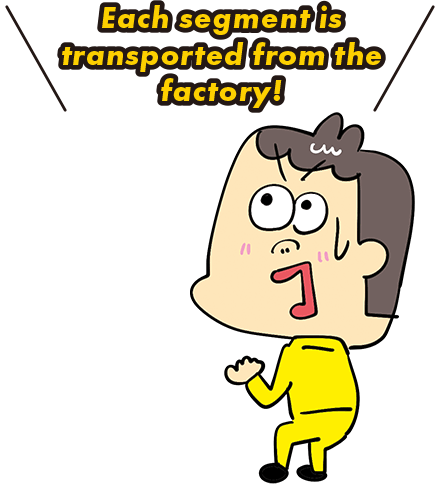 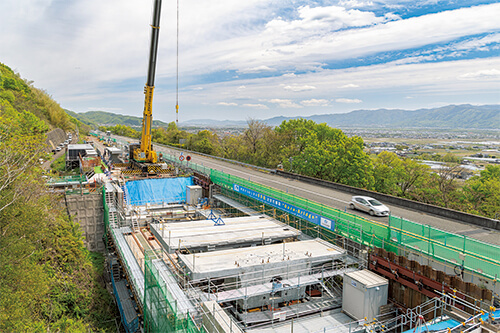 Bessodani Bridge is 27.5 meters in length. The aim is to verify the construction, cost, and safety aspects of Dura-Bridge by first applying it to a relatively short bridge. SMCC and NEXCO-West intend to apply this technology to bridges with a length of 300-500 meters in the future.

I am now standing in the middle of the Tokushima Expressway running east and west through Tokushima Prefecture in Shikoku Island. The surrounding scenery is peaceful and feels tranquil with steep mountains on one side and an open field on the other. You may not notice if you are just driving through this beautiful countryside but it is worth noting that the construction of a revolutionary new bridge, the first of its kind in the world, is underway.

Believe it or not, there are at least 720,000 bridges in Japan. That’s an immense lot of bridges, particularly when you find out that 50% of them require maintenance. Since Japan’s first expressway opened more than half a century ago, this vital infrastructure that supported our country’s development is now aging and facing a problem due to rapid deterioration.

Steel reinforcing bars are the main cause of deterioration of concrete bridges. Rebars are indispensable for reinforcing concrete but, as the years roll by, they get rusty due to salty air blowing in from the ocean and the use of antifreeze agent in winter. Rust is a great enemy of the bridge, causing rampant damage, such as spalling of concrete. Corrosion-free bridges are a long-cherished dream of engineers in the infrastructure industry. Bessodani Bridge, here in Tokushima, is at the forefront of the war against corrosion.

How do you construct a corrosion-free bridge? Dura-Bridge technology developed jointly by Sumitomo Mitsui Construction (SMCC) and West Nippon Expressway (NEXCO-West) is being implemented at the Bessodani Bridge project. Dura-Bridge is a method that combines many breakthrough technologies, but first and foremost, rebar is not used anywhere in the concrete.

“For reinforcement, Dura-Bridge uses aramid FRP rods instead of rebar,” explains Mr. Taisuke Fujioka of SMCC as he shows us around the construction site. What are these lengthy, shimmering, champagne gold rods that look like locks of blond hair? They are bundles of aramid fibers. (In fact, aramid fibers are finer than a human hair!) Even a slender 7.4mm-diameter rod can bear the weight of four cars, about 8 tons. With six times the strength of steel rebar, aramid rods do not corrode in any environment. I couldn't help but be impressed by the beauty and the toughness of these aramid rods. 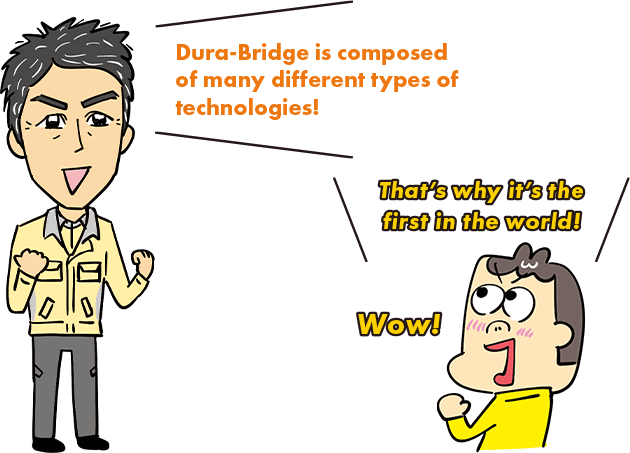 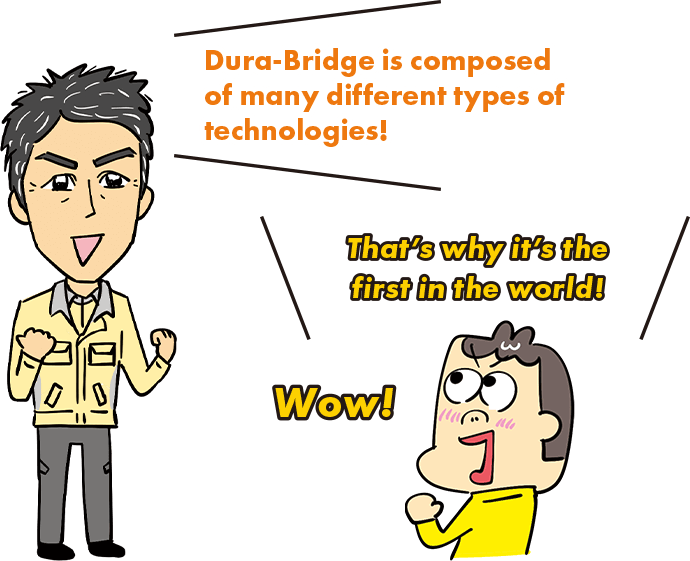 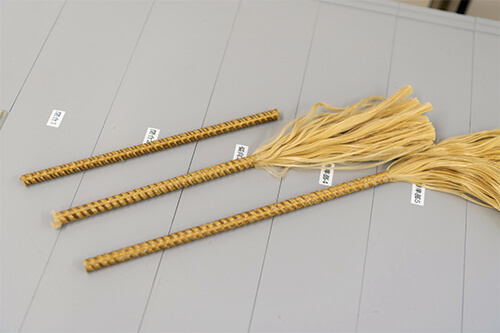 Aramid fiber used in aramid RFP rods is a type of chemical fiber that is also applied for bulletproof vests. With strength comparable to that of carbon fiber, it can withstand tremendous tension.

At the site, there is a space for visitors where they can be briefed about the technology (leftabove). Concrete segments are lifted down by crane, and then transported by a mobile trolley and slotted into their predetermined positions (rightbottom).

Though aramid fibers were first developed back in the 1980s, they were not applied to the bridge construction because it was too costly. “We constructed a bridge at our plant using aramid fibers in 1990 as a trial, but it cost five times more than a conventional bridge,” says Mr. Fujioka with a bitter smile. In the 30 years since then, the demand for corrosion-free bridge has greatly increased. Dura-Bridge was developed specifically to apply aramid rods in bridge construction while striving to hold down costs.

Use of high-strength fiber reinforced concrete was the key to achieving a dramatic reduction in cost. “We managed to minimize the number of aramid rods used as reinforcement by adding high performance fiber to the concrete mix, achieving at least three times more strength than that of conventional concrete,” explains Mr. Fujioka.

Another winning factor is the butterfly web structure. The web is the lateral structure of a bridge. Whereas a typical bridge viewed from the side is just a blank wall, the lateral structure of this revolutionary bridge is composed of interlocking butterfly-shaped panels. As you can see by the look of it, the less concrete used, the fewer the aramid rods required. “A bridge with the butterfly web structure can be 10-20% lighter than a typical bridge. In the world of bridge design, it is extremely difficult to achieve a weight reduction of even 1% or 2%. So this is definitely a breakthrough,” says Mr. Fujioka proudly.

With Dura-Bridge, which is the culmination of these various innovations, bridge construction only costs no more than 1.5 times that of a typical conventional bridge. According to Mr. Fujioka, “for a conventional bridge, maintenance costs are typically 2-3 times more than the construction cost. But for a corrosion-free bridge employing Dura-Bridge technology, the maintenance costs can be slashed massively. So, even it costs 1.5 times more, it certainly pays off over the lifetime of the bridge.”

There are high expectations that Dura-Bridge technology will be widely adopted in future as it achieved a realistic cost reduction. Bessodani Bridge is the world’s first project that Dura-Bridge is applied to a bridge on the expressway. At the site, prefabricated bridge segments delivered all the way from a factory in Shiga Prefecture were just being assembled. Knowledge and experience gained during this project will be put to good use in future development. The next generation bridge that is strong and corrosion-free will spread from this place to the world, contributing to the safe and secure societies. It’s an exciting prospect that touches my heart while stirring my imagination. 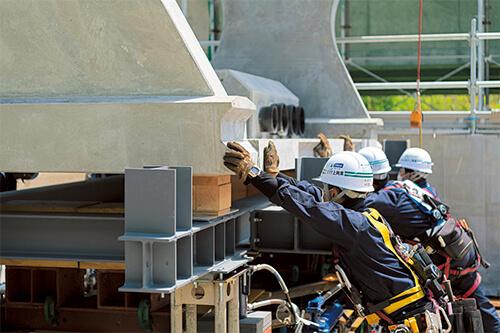 In the Bessodani Bridge project, segments fabricated at a factory are delivered to the site and then assembled, thus saving on-site labor and improving the efficiency. 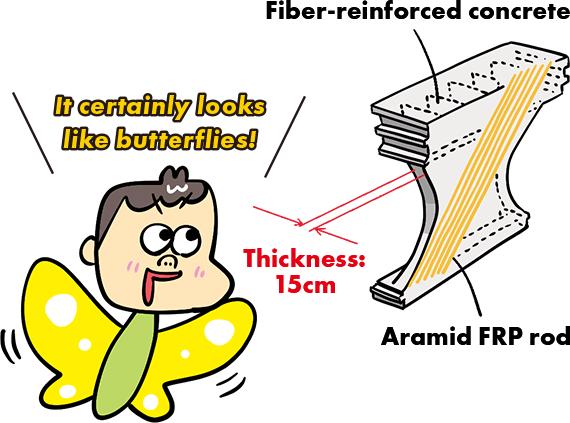 Preparation is the key to success!

People in business are often torn apart as in most cases their dreams collide with reality. Once the project commences, keeping the cost within the budget limits us from applying all the possibilities one has dreamed about. However, the team succeeded in developing “Dura-Bridge” technology, curtailing the cost to a practical level through persistent research and trial and error on materials and structures while maintaining their focus on the “corrosion-free” bridge. This success story made us realize that years of blood, sweat, and tears is how we make our world a better place. 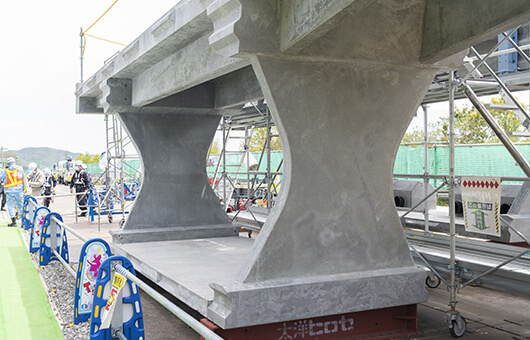 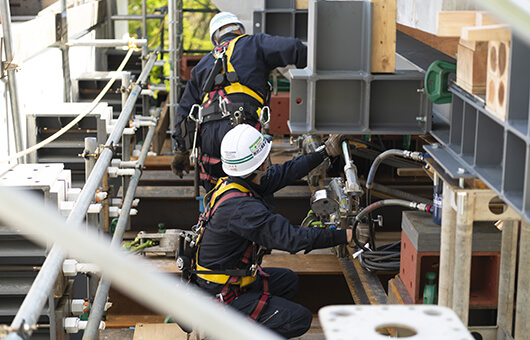