Founded in 1909 as Japan's first tire manufacturer, for over 110 years Sumitomo Rubber Industries has been setting the pace in tire development attuned to the evolving needs of the changing era. 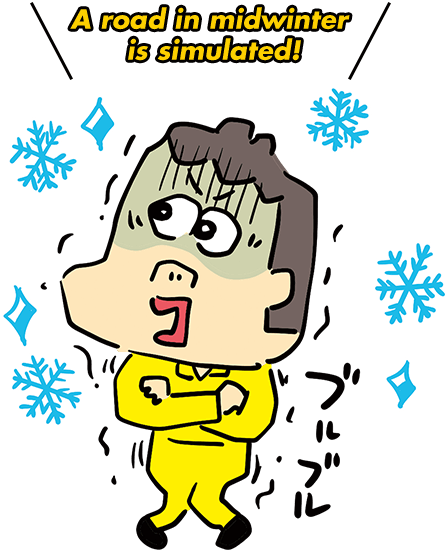 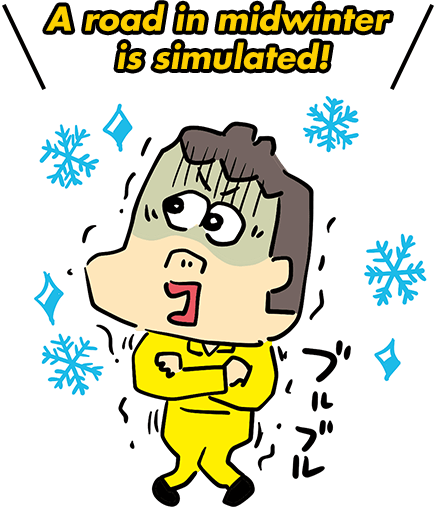 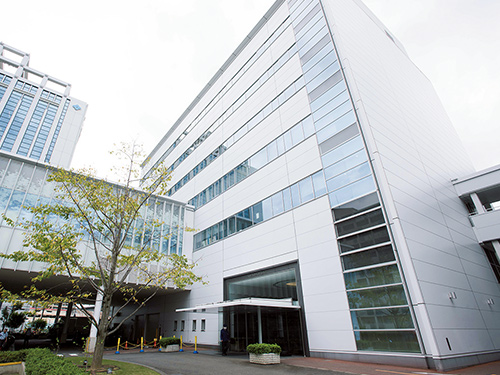 Located adjacent to the head office, the Tyre Technical Center, a six-story building with a basement, has a total floor area of 10,520m2. As globalization of the company's development structure progresses, the Center is spearheading advanced tire development.

Round, black auto tires are so familiar one scarcely pays them any attention. But these unsung heroes of everyday life are in fact engineered to fine tolerances and must satisfy stringent performance criteria. So painstaking evaluation plays a crucially important role. Keen to know more about ever evolving tire technology, I jumped at the chance to visit Sumitomo Rubber Industries Tyre Technical Center in the port city of Kobe.

The Tyre Technical Center was established in September 2009 to commemorate the centenary of Sumitomo Rubber Industries. Test facilities previously dispersed among several factories were concentrated here. I was surprised to learn that the Center has some 200 test facilities, ranging from big equipment to small setups. Tire materials, the tires themselves, and their performance when mounted on cars are rigorously tested and exhaustively analyzed. For this visit, we focused on tire performance evaluation (although other fascinating topics clamoring for attention included the world’s first 100% fossil resource-free tire and novel raw materials).

Roughly speaking, tire performance can be broken down into four elements: driving stability, comfort, wear resistance for long life, and fuel efficiency. The Center conducts all sorts of experiments, evaluations, and analyses to enhance these attributes. Consider, for example, the studless tires that are indispensable for getting around in freezing wintry conditions. You want your tires to have a good grip on icy or snowbound roads but don’t want them to wear out quickly. This year Sumitomo Rubber Industries launched a breakthrough product that achieves both a firm grip on icy surfaces and superior abrasion resistance. This tire is a crystallization of the company's expertise. 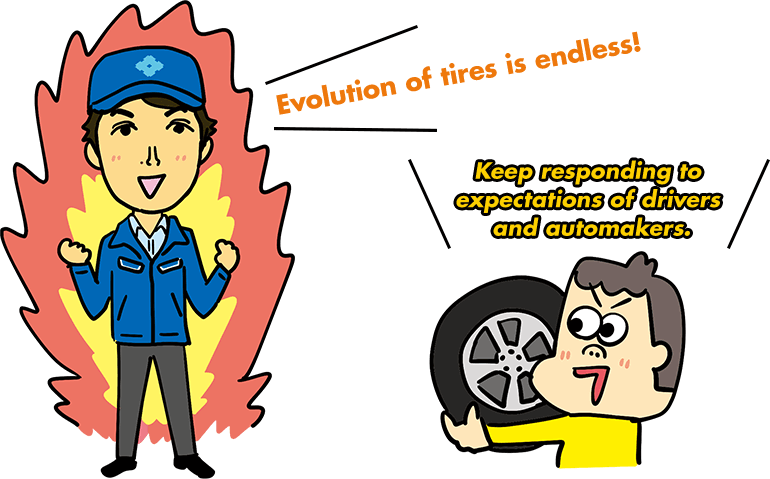 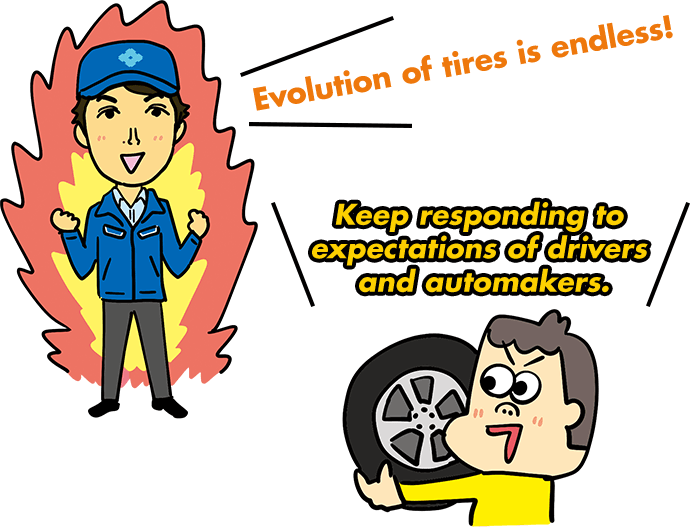 My guide, Mr. Akira Kamigoro of the Tyre Technical HQ, Test Dept. II, first showed me a friction tester equipped with a drum emulating low-μ conditions. The Greek letter μ represents the coefficient of friction. Low-μ indicates that surfaces are slippery because of precipitation. This friction tester also incorporates a snow gun. Within the 3-meter-diameter drum, road surfaces similar to those in the great outdoors are reproduced, such as in rainy, icy, or snowy weather, and tire performance when stopping, running, turning, and so forth is tested and analyzed. Inside the tester it's a chilly minus 2℃.

Next was a friction tester equipped with a drum emulating high-μ conditions. With its 5-meter-diameter drum, this is the big brother of the one I just saw. Mr. Kamigoro took great pride in showing me this outsize tester, which is one of the few of its kind in the world. The diameter is big so as to make the contact surface as flat as possible. The 36 plates inside the drum, each weighing 38kg, can be configured to simulate everything from the surface of an ordinary asphalt road to that of a racing circuit. The drum rotates super fast to reproduce speeds of up to 250 kph. I was shown a video depicting the dynamic performance of this testing equipment, which is primarily used to evaluate the grip of sport tires.

My final destination was a large anechoic testing chamber. The walls and ceiling have special contoured texture with indentations and protuberances designed to absorb sound without reflection. In this testing chamber, a tire runs on a simulated road surface and noises, such as the noise made by a tire when it rolls into and out of contact with the road and the tire cavity resonance noise made by tread grooves, are measured and analyzed. By clarifying the relations between tread pattern and noise, engineers are able to develop noise-reducing tires. Take a close look at a tire and you will see that its pitch varies slightly in size and shape. I was surprised by just how detailed tire design is. Although one can only see a little bit of the simulated road surface, beneath the floor is a 3-meter-diameter drum. That gives you an idea of the scale of this testing chamber.

In this chamber, I was shown SILENT CORE (specialized noise-absorbing sponge), a world's first technology developed by Sumitomo Rubber Industries. Resonance within a tire equipped with SILENT CORE is totally different from that in a tire that doesn't use this technology. Now that electrification is cutting car engine noise, engineers are increasingly focusing on reducing tire noise. "Improvements of the order of 10 to 20% are needed for car users to realize the difference between their new tires and their previous ones. It’s a big challenge. We are testing, analyzing, and developing in pursuit of such substantial performance gains," says Mr. Kamigoro. From now on I will look at car tires in a new light!

The big challenge in tire development is to achieve improvements in various seemingly contradictory performance elements: driving stability, comfort, wear resistance, and fuel efficiency. Low rolling resistance is great for comfortable driving but a firm grip is a must for effective braking. On the other hand, the use of soft rubber to enhance grip means your tires will wear out fast. And the downside of lighter tires to enhance fuel efficiency is less comfort and more noise. Testing and analysis conducted by engineers at the Tyre Technical Center are at the heart of efforts to strike a balance among all these factors so as to achieve the best possible overall tire performance. 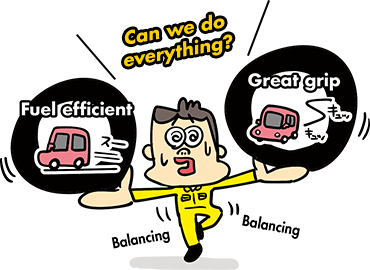 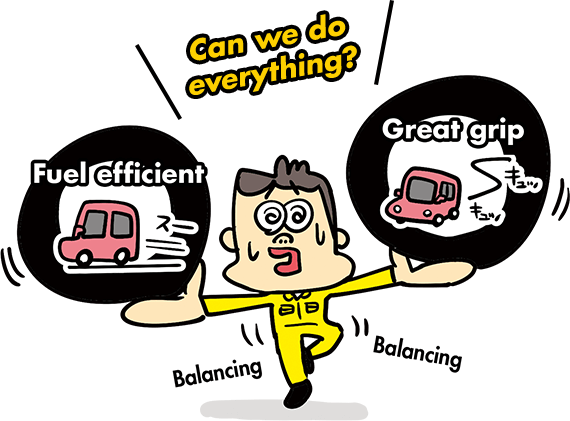 One challenge after another

Just a 10-minute drive from JR Shin-Kobe Station is the Tyre Technical Center, sharing the same site as Sumitomo Rubber Industries head office building. Kobe Factory, heavily damaged by a major earthquake that struck the region in 1995, once stood here. The Center was inaugurated in 2009, the company’s centenary. Tires were in fact manufactured here in Kobe for about 100 years, long before anyone had ever given a thought to equipping them with noise-absorbing sponge or other high-tech innovations. As the electrification of cars progresses, tires are taking on new roles, becoming ever more sophisticated and versatile. Always relishing a challenge, the Center is eagerly responding to these increasingly complex needs while doing its utmost to enhance productivity.